Home » Pyramid to Plate: A New Guide to a Healthy Diet

Pyramid to Plate: A New Guide to a Healthy Diet 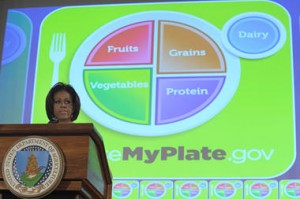 Last week, First Lady Michelle Obama unveiled the new USDA symbol for healthy eating: a plate. This new plate will be replacing the well-recognized but confusing food pyramid, which has been the symbol for healthy eating for the past two decades. The food pyramid, originally created in 1992, was modified in 2005 but still confused the public as to what constitutes a healthy diet – the new food plate aims to clarify this.

The new food plate is divided into colorful sections, showing each of the basic food groups: fruits, vegetables, grains, proteins, and dairies. The plate focuses on portions per plate rather than servings per day, like the old food pyramid. Nutrition advocates and food industry groups have praised this new plate as it clarifies the recommended portions of each major food group. “People don’t eat off a pyramid, they eat off a plate,” said Dawn Jackson Blatner, a registered dietitian in Chicago (WSJ). The plate has great potential to be successful because it allows people to visually compare their plate to the icon without counting or measuring servings.
Critics of the food plate say the plate is still unclear in that it has a section labeled “protein” although grains and dairy can be important sources of protein. Not to mention, most Americans get more protein than they need (Time). However, they agree that the new plate is still better than the pyramid. Though this one food plate may not convert everyone’s life into a healthy lifestyle, it is definitely a step in the right direction. So what does this mean for you? Nutritionists say after switching from the food pyramid to the food plate, most people are shocked at their lack of vegetable and fruit consumption. Most people eat around a quarter of a plate of fruits and vegetables, not half a plate as recommended by the new icon.
This emphasis on half a plate of fruits and vegetables is the first part of a campaign to encourage a healthier lifestyle. The campaign, which emphasizes one message at a time for best effect, will later encourage consumers to eat smaller portions and drink water in place of sugary drinks. You can find more detailed advice and the full nutrition guidelines at ChooseMyPlate.gov. The new food plate icon was created by a partnership between the USDA, the Centers for Disease Control and Prevention, and the First Lady Michelle Obama’s team. It included input from focus groups with about 4,500 people, including children. To learn more about healthcare and how you can start your career in healthcare visit Fremont College of Healthcare.