The name Playboy evokes many images, from the iconic bunny ears to the beauties featured in its magazine. It even conjures up the image of its founder, Hugh Hefner, strutting around in a smoking jacket with a pair of beautiful women at his side. Hefner founded the magazine in 1953 with $6,000 in loans and $600 of his own money. The first issue was designed on his kitchen table with photos of Marilyn Monroe that he purchased for $500. While its historic past is quite impressive, Scott Flanders, Chief Executive Officer of Playboy Enterprises Inc., would like you to think of brand management. Flanders, who became CEO in 2009, is in charge of business operations and the tactical direction of the global brand. He oversees all aspects of the brand, including print, online, TV and licensing. From an entrepreneurial and business leadership perspective, Scott Flanders and his story of becoming the CEO of Playboy provides us with valuable and actionable insights to learn from. 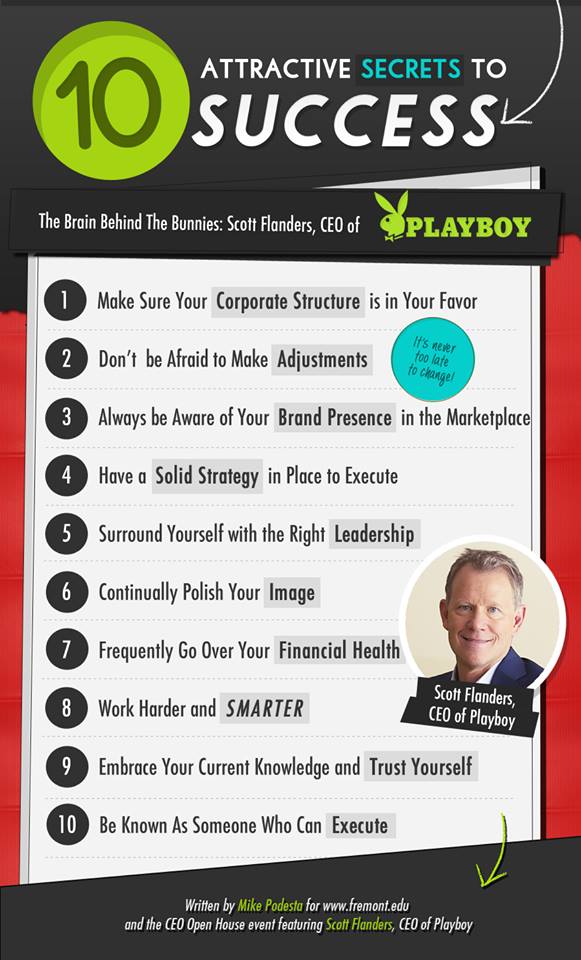 10 Attractive Secrets to Success from Playboy CEO, Scott Flanders: The Brain Behind the Bunnies

When Flanders was handed the reins, he was called upon to transform Playboy from an adult entertainment business to a brand management company. He helped steer Playboy, after 40 years as a public company, into a private company when it was acquired by Rizvi Traverse Management in 2011. His goal is to build, improve, and uphold the brand name so it is desirable to both old and new markets.
Flanders is no stranger to managing a major multimedia company. Before joining Playboy, he was president and CEO of Freedom Communications, a position he held for three years. During his tenure, he managed its interactive media, TV stations and newspapers with annual revenue of nearly $1 billion. Prior to that, Flanders was chairman and CEO of Columbia House, which at the time was the largest direct marketing brand for music and videos. As a Certified Public Accountant, Flanders helped turn around a rocky financial landscape at Columbia House and negotiated a buyout with The Blackstone Group. As the CEO of Macmillan Publishing, one of the largest reference and computer book publisher, he increased annual sales from $25 million to $500 million.

Flanders is the first CEO outside of founder Hugh Hefner’s family. Hefner’s daughter Christie held the role for 20 years. Flanders is known to have a more bold and businesslike demeanor. It is far different than Christie, who took more of a family approach, than a hard line business approach. She was known for giving raises based on tenure rather than the current model, which is based on overall performance. Part of the culture shock can be attributed to the fact that the company was in such dire financial troubles. Many can argue that a change in philosophy was desperately needed. Restructuring and having everyone on board wasn’t necessarily going to be easy. Many tend to be set in their ways when a business has been around for 60 years. Flanders had plenty of ideas of how to restructure a company that was hemorrhaging millions of dollars. He had successfully done so in his prior positions. The first thing he did was cut the staff by 75 percent. When Flanders took over, there were 585 people employed, it has a much slimmer work staff of only 165 employees today. He then moved its headquarters from its longstanding downtown Chicago building to Los Angeles. Much of the business operations were then outsourced. Playboy trim med its business by selling off Spice channel as well as other TV and digital accounts to Manwin, an adult entertainment company. 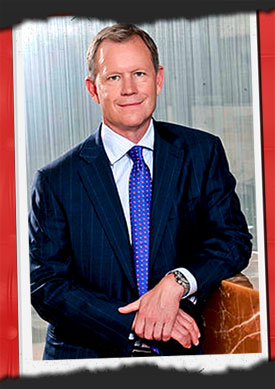 Playboy is now forging ahead with a licensing and brand management marketing plan. The cost associated with both is far less than the cost of printing a magazine. Since Playboy is so established and there is plenty of brand recognition, the company is licensing itself as a lifestyle brand. It’s not selling a specific product per se but more of an image to become more mainstream. That is why it has been important to distance itself from nudity and offer non-nude content. Playboy has created alliances with trendsetters such as Dolce & Gabbana to make its brand more desirable among consumers. It wants to be a mainstream brand, so much in fact that Apple has allowed it to launch an app in its Apple Store. Playboy had been previously banned from the Apple Store because of its affiliation with adult entertainment. Apple changed its mind after Playboy created an app with bundled content that included articles, and life tips, as well as nudity-free and tasteful photos of women. Essentially, similar content to what would be found in Maxim or GQ Magazine. Playboy has further distanced itself from adult entertainment by creating a channel on Sirius XM satellite radio and introducing reality TV shows. At one point, the men’s magazine was losing roughly $12 million a year. It tried to stop the bleeding by cutting down on print costs by publishing fewer issues and copies which significantly helped reduce overhead. It is now losing about $6 million a year but much of that is neutralized by licensing of its international publications. While total revenue is down from $240 million in 2009 to $135 million, its profits have doubled from $19 million to $39 million. The licensing strategy seems to be working, as Playboy has seen a $25 million increase in licensing deals alone. In 2009, its licensing deals netted a profit of $37 million. It has increased to a little more than $62 million today. The company has also cut costs by $17 million per year since Flanders took over, partly due to the outsourcing and cutting most of the media business. The magazine has undergone a design change with an emphasis on natural beauty along with more vibrant and tasteful pictures. It had to change with the times as people are consuming more content online for free.

The Internet has presented a wide open business model for Playboy Enterprises. Gone are the days when magazines and newspapers ruled the marketing world. Subscriptions for these mediums are plummeting and it wasn’t an easy transition to the online world as Playboy’s competitors essentially gave all of their content away for free. It’s tough to make a profit when competitors give away a product. Even with all of these hurdles, Flanders is finding a way to make the brand thrive.