Home » Top 15 Grammar Mistakes (and How to Avoid Them)

Top 15 Grammar Mistakes (and How to Avoid Them) 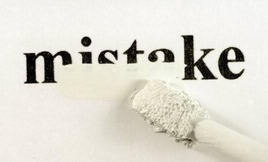 Proper grammar and good writing skills are more important than ever before with the increased use of email and text messaging in business, and the growing necessity of applying for jobs online. Don’t let grammar mistakes detract from your credibility or prevent you from landing your next job. Continue reading to learn 15 of the most common grammar mistakes and how to avoid them.

1. Their/There/They’re
Their = possessed or claimed by a group.
Example: I am going to their apartment tonight.
There = place.
Example: I will meet you there.
They’re = they are.
Example: They’re at the movie theater.
2. Who/That
Who = refers back to a particular person.
Example: The woman who found my wallet contacted me today.
That = refers to a non-human object.
Example: The school that raised the most money was honored at a banquet.
3. His or Her/Their
His or her = belonging to a single person
Example: Anyone can bring his or her dog to the event at the park.
Their = possessed or claimed by a group
Example: Attendees can bring their dogs to the event at the park.
4. It’s/Its
It’s = it is/has
Example: It’s a nice day today.
Its = belonging to something
Example: The company is having its monthly meeting on Friday.
5. Who’s/Whose
Who’s = who is/has
Example: Who’s going to the party tonight?
Whose = belonging to a person.
Example: The woman whose sister is coming to town has to leave the party early.
Hint: If it doesn’t sound right to say “who is/has,” instead, then use whose.
6. I/Me
I = use when referring to yourself before the verb.
Example: My friend and I went to the event.
Me = use when referring to yourself after the verb.
Example: My friend went to the event with my spouse and me.
Hint: If it doesn’t sound right to say “me” by itself, then use I.
7. Affect/Effect
Affect = to influence.
Example: A good teacher can affect kids positively.
Effect = 1. As a result. 2. A change that is a result or consequence of an action or other cause.
Example: The teacher had a positive effect on her students.
8. ‘s/s’
‘s = belonging to a single person or object.
Example: The woman’s dog was playful.
s’ = belonging to multiple people or objects.
Example: My friends’ dogs are playing in the yard.
9. Fewer/Less
Fewer = a small number of.
Example: The company has fewer than 20 employees.
Less = to a smaller extent.
Example: The company is less successful now that it only has 20 employees.
10. Than/Then
Than = shows comparison.
Example: It is hotter today than it was yesterday.
Then = indicates sequence.
Example: He turned off the lights, then went to bed.
11. Lay/Lie
Lay = to place or put.
Example: Before you enter the room, you’ll need to lay down your belongings on the table.
Lie = to recline.
Example: Samantha was tired this morning so she decided to lie down.
12. Farther/Further
Farther = a measure of distance or length.
Example: The baseball player hit the ball farther than he ever had.
Further = more of.
Example: She is enrolling in college because she wants to further her education.
13. Your/You’re
Your = Belonging to or associated with the person or people that the speaker is addressing.
Example: I will return your book tomorrow.
You’re = you are.
Example: You’re welcome to join us for tea this afternoon.
14. To/Too
To = expressing motion in the direction of (a particular location).
Example: I am going to the store tonight.
Too = 1. To an excessive extent or degree. 2. Also, as well.
Example: Jim was driving too fast.
Example: I will be participating in the race, too.
15. Into/In To
Into = to the inside of; in toward. The word into answers the question, where?
Example: Jane walked into her office to find a pile of papers on her desk.
In to = where the words in and to just happen to end up next to each other, they must remain separate words.
Example: Peter walked in to see his supervisor.
Learn proper grammar and avoid these common grammar errors by earning a college degree at Fremont University. At Fremont University, you can earn a degree in just 15 months and be on your way to a rewarding career. There are a number of exciting degree programs For students to consider. Some of the several in-demand fields, include online marketing classes, Multimedia Design, Business Leadership, Paralegal Studies, and Sports Therapy. Contact us today to arrange a visit to our Cerritos college campus or Los Angeles college campus or request a free career guide to learn more about how Fremont University can prepare you for the career of your dreams!